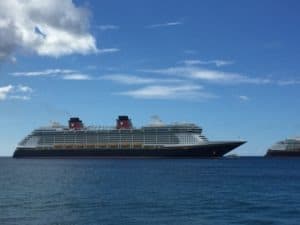 We took our first Disney cruise when my daughter was just a year old.  She was so excited, we were so excited and I had read lots of articles online to prepare myself.  My husband and I had been on a bunch of cruises before so I thought I had a good handle on things, but cruising with a little one and on a Disney cruise is a little different.  Here are some of the top tips that I found from our experiences on the Disney ships:

These are some of the lesser known tips that I came across that definitely helped us when we did future cruises and I hope they helped you too!

Amazon Affiliates: Dresses & Dinosaurs is a participant in the Amazon Services LLC Associates Program, an affiliate advertising program designed to provide a means for sites to earn advertising fees by advertising and linking to amazon.com and affiliated sites.