This past Saturday, we went to the Disney Junior Dance Party show at the Boch Center in Boston.  We sat a few rows up in the balcony and were lucky enough to get seats at the end of the row. 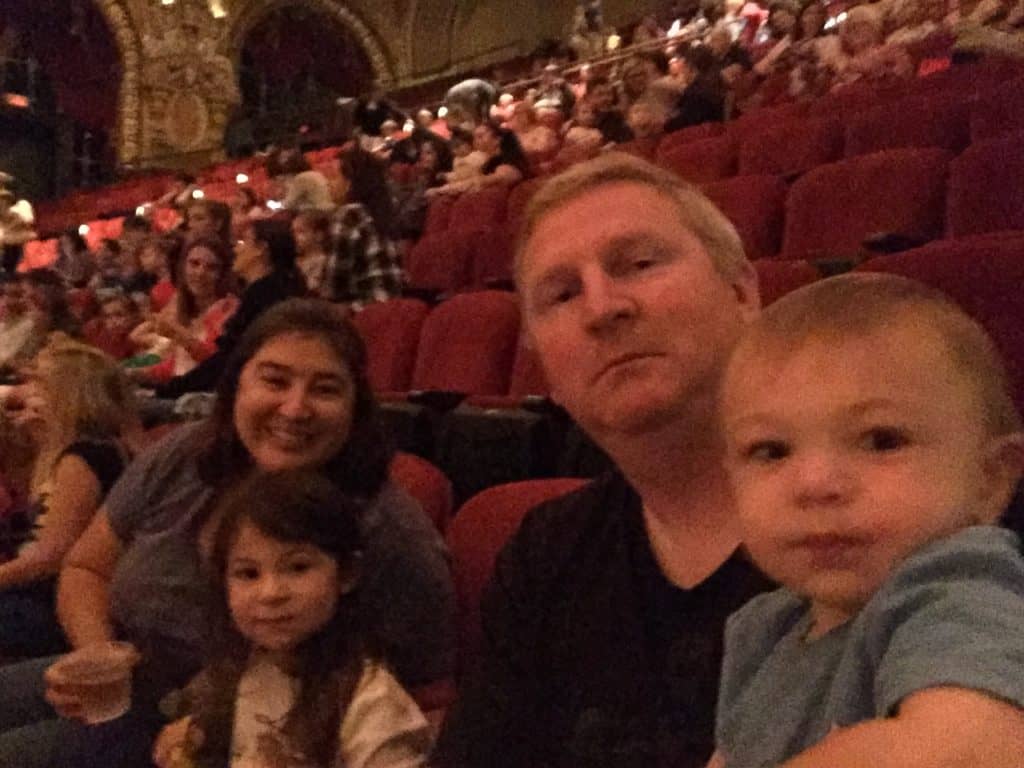 My daughter, Peyton, was super excited to go since she is a huge fan (and who am I kidding, so am I!) of the shows on Disney Junior.  We have dance parties in our living room pretty often to the theme songs to our favorite shows!

The main theme of the show was that there was a Mickey shaped disco ball that was supposed to kick off the dance party, but it was missing and Mickey and Roadster Racers were trying to find it – that made the whole show so fun!  We had an absolute blast!  Here are 5 things to know about the Disney Junior Dance Party:

Get Ready for a Lot of Fun 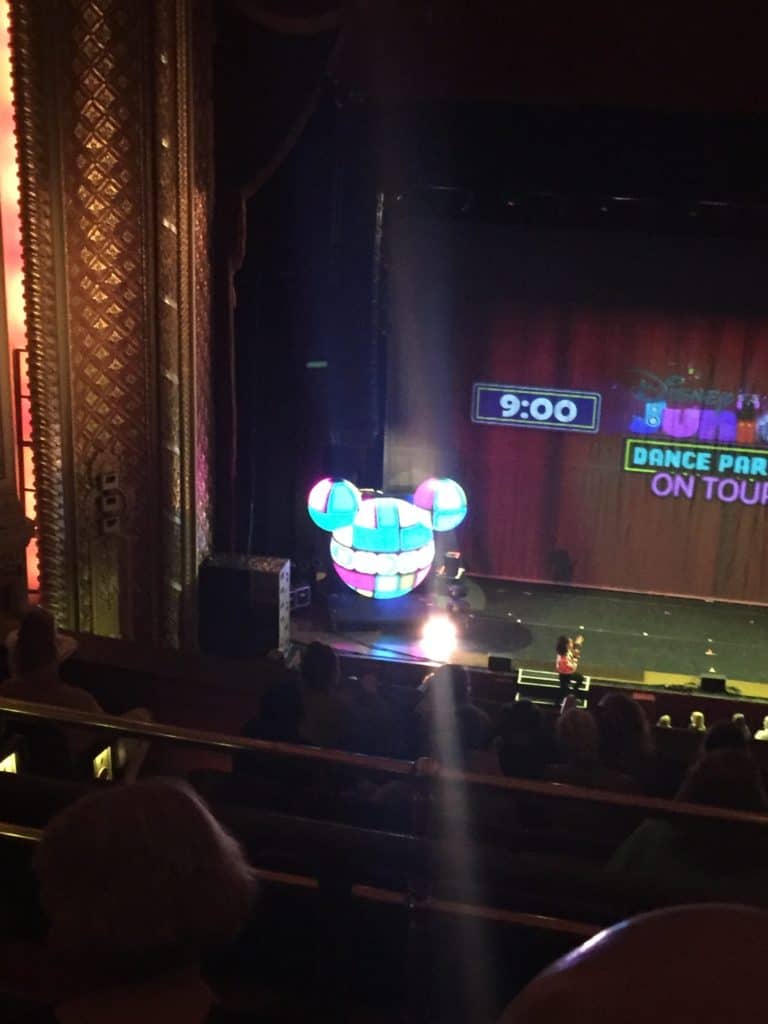 Not surprising since this is a Disney show, they started the excitement even before the show started!  They started a big 10 minute countdown and two “DJ’s” came out and taught all the kids three Mickey moves to get the music going.  It got everyone grooving from the very beginning and the music rarely stopped the entire show. 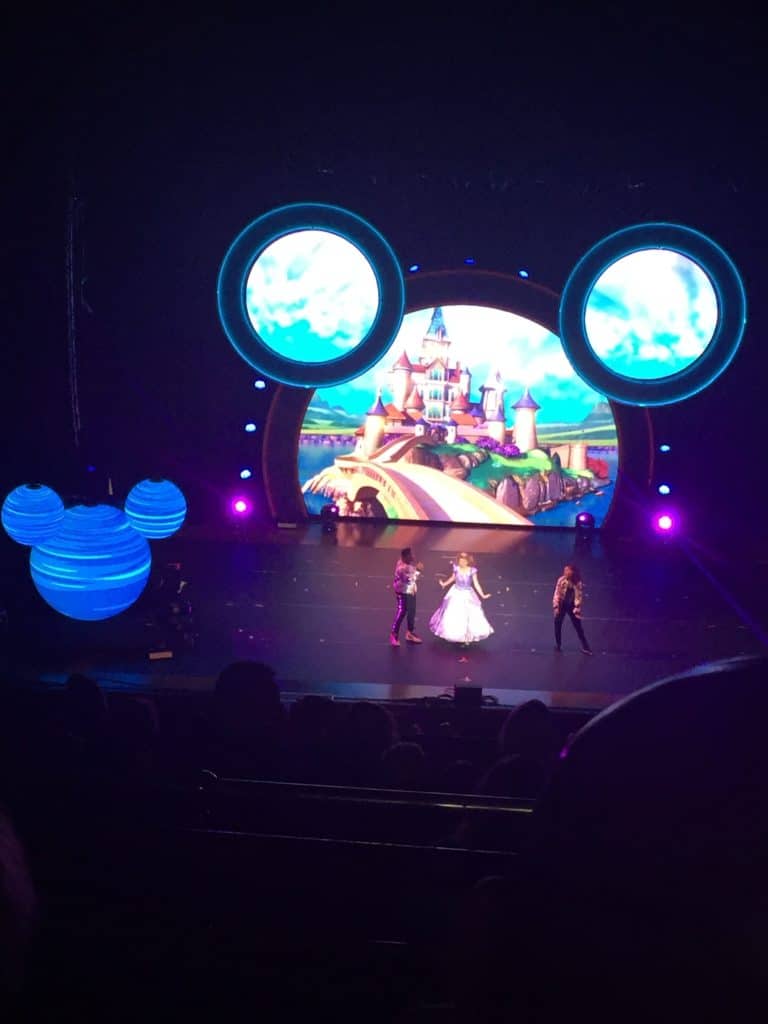 They had songs from almost every show on the Disney Junior channel, which was amazing considering how many different shows there are.  It was incredible how they easily transitioned from show to show.  They would move the story along and then start the next “featured” show by playing the theme song, followed by one or two other songs that had been on the show.

Almost Every Show Character is there in Person 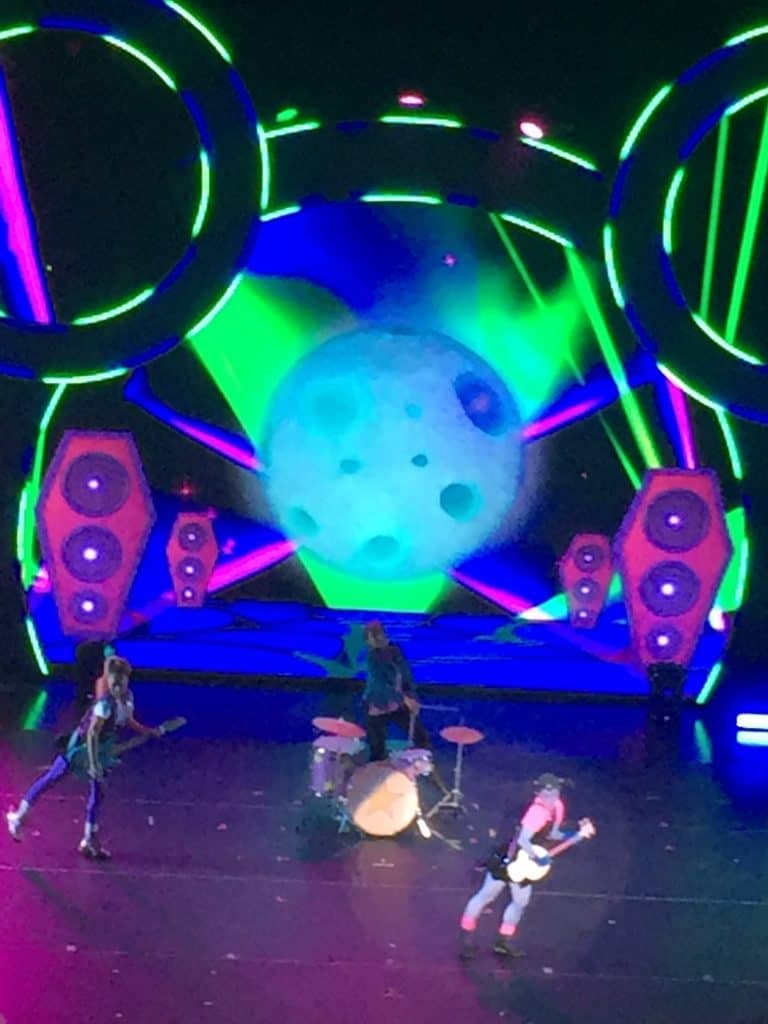 While we really love the shows, Peyton was even more excited to see the characters, especially her favorites, Fancy Nancy and Vampirina.  They were both awesome!

There were characters onstage from almost every show including Sofia the First, Puppy Dog Pals, Elena of Avalor, Fancy Nancy, Vampirina, and Doc McStuffins.  Mickey, Minnie and Goofy also made appearances representing Mickey and the Roadster Racers and the Happy Helpers. 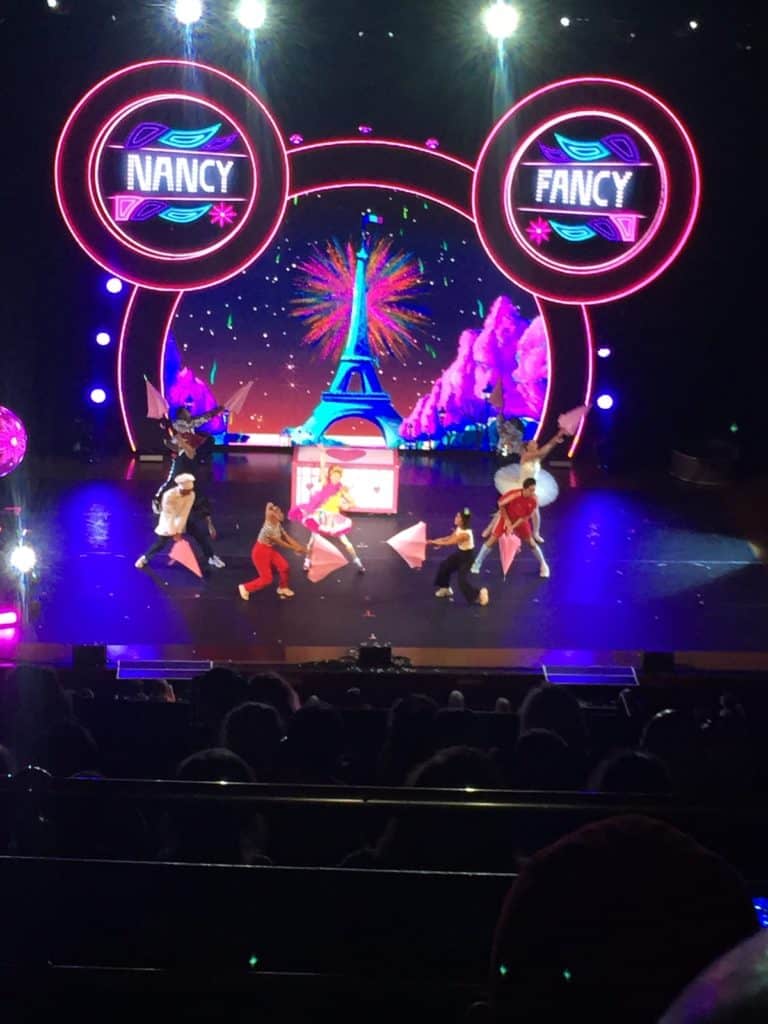 The only two shows that were featured but did not have any live characters as part of the show were Muppet Babies and the Lion Guard.  While I wasn’t surprised, we LOVE the songs from these shows, so it was still super fun that they were included.  We were particularly happy to the Lion Guard since Here Comes the Lion Guard has been our favorite song since the show started! 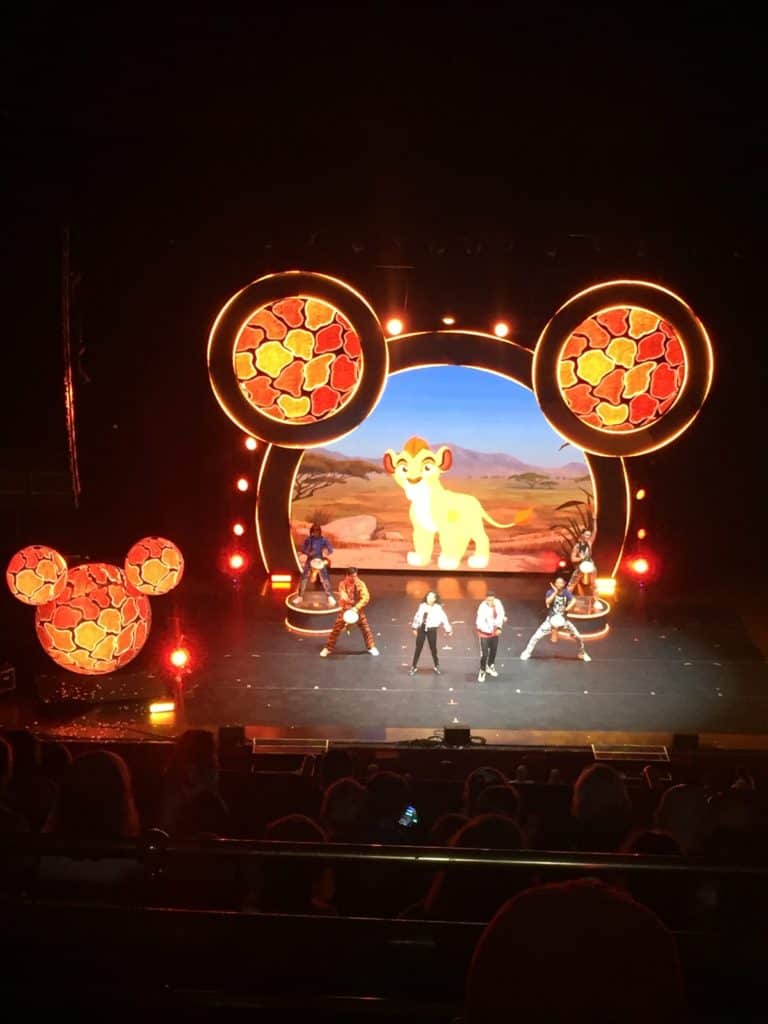 You Will be Singing Along

Admit it – if you have ever watched a Disney Junior show with your kids,  you know the songs are addictive.  They get stuck in your head and you mind yourself singing them when your kids aren’t even around.  Just me?  I’m constantly doing this.

Peyton was singing all the songs and so was I.  My husband even joined in for some.  It’s hard not to get caught up in the excitement and the show!

As I mentioned before, they taught the kids at the beginning about certain dance moves to do to get the music started, but then during the show, Goofy came out for a segment and taught everyone the hot dog dance from Mickey Mouse Clubhouse.  They had all the kids get up and do the dance along with him! 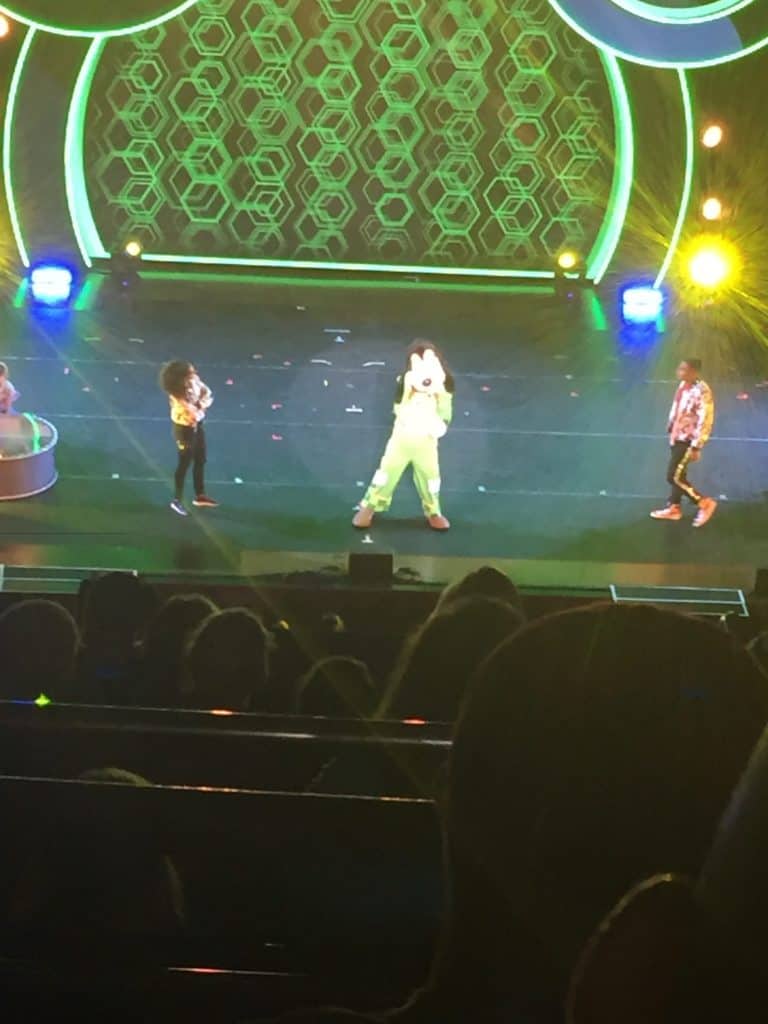 They also loved when the kids got up from their seats and were dancing.  More than a few times, they went down into the audience and danced with different people.

The Smiles from the Kids are Worth Every Penny! 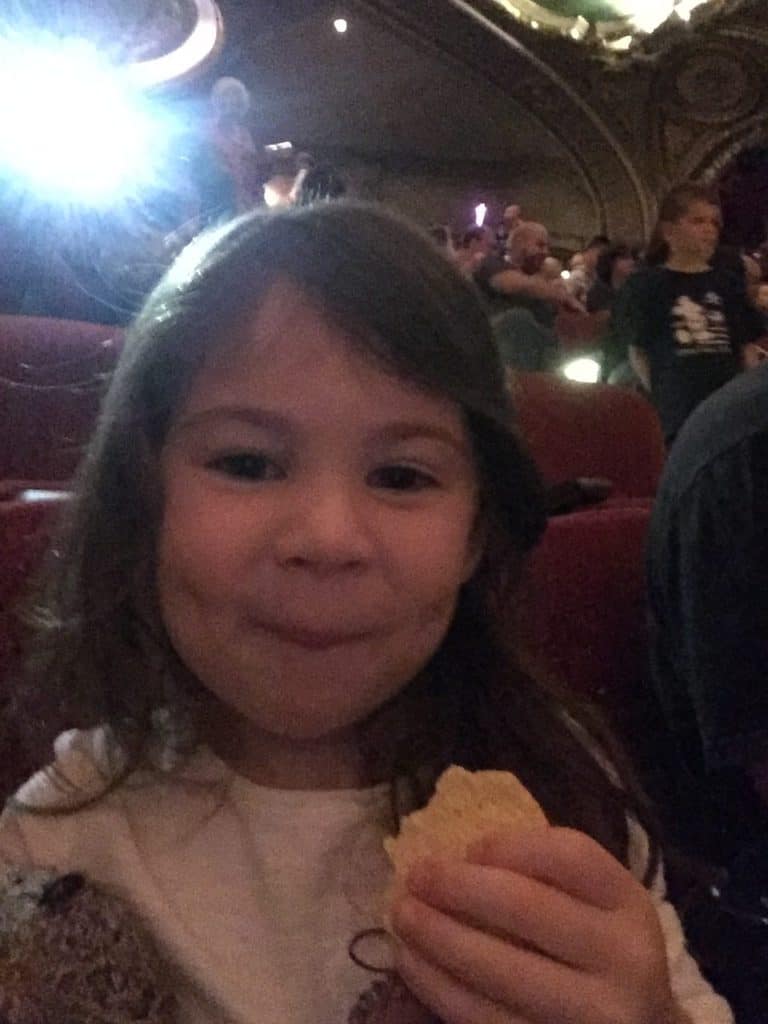 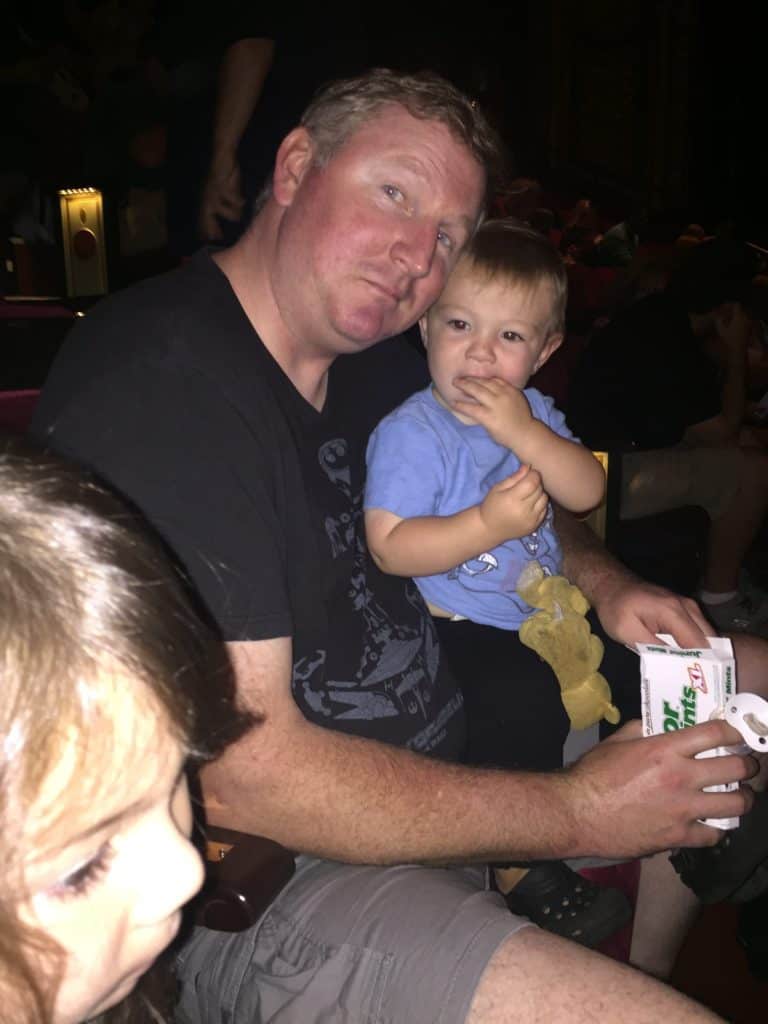 Peyton and my son Gage, who is only 16 months old, but loves music, both loved it!  Peyton got so excited when her favorites came out, that she would cheer so loud and was yelling “Hi Fancy Nancy!!” and waving enthusiastically.  It made my whole day seeing how excited and happy they were.  They were completely engaged and really loved hearing their favorite songs.

We had an absolute blast at the Disney Junior Dance party and I would highly recommend it if you get a chance to see it!

Amazon Affiliates: Dresses & Dinosaurs is a participant in the Amazon Services LLC Associates Program, an affiliate advertising program designed to provide a means for sites to earn advertising fees by advertising and linking to amazon.com and affiliated sites.